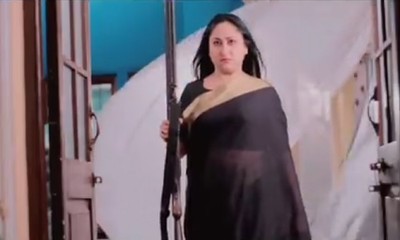 Huge drama is coming up next in your favorite TV show Sasural Simar Ka 2 where you will get to see something truly unexpected.

Geetanjali Devi is burning in anger after seeing Vivaan and Reema’s marriage.

Reema succeeds in marrying Vivaan wherein Vivaan is just her pawn to take revenge from the Oswals.

Geetanjali Devi is not ready to let this matter pass by.

Just when Vivaan and Reema mark their entry in the Oswal Mansion, what Geetanjali Devi does is what gets everyone shocked to the core.

Reema and Simar's life in danger

Geetanjali Devi wears a black saree and turns a black widow to kill Reema dead after she married Vivaan.

While the bodyguards trap the family and grab Vivaan, Geetanjali takes Reema to the gun point.

Not only Reema, but Simar's life is also in extreme danger.

Do not miss the next big twist, so make sure to read the new updates at SerialGossip.com