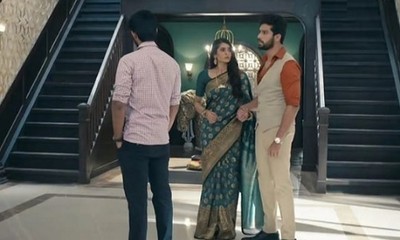 Star Plus serial Mehndi Hai Rachne Wali is about to witness Raghav and Mandar's major confrontation for Pallavi.

Mandar again gives an ultimatum to Raghav that he will snatch his Pallavi within the next 7 days.

Raghav and Pallavi are truly in love when Pallavi clarifies to Mandar that she accepts Raghav as her husband.

Even so, Pallavi made her point clear, Mandar is still after her and this makes Raghav doubt his intention.

Raghav is super suspicious of Mandar’s intentions and his identity.

Wherein he comes to know about Mandar’s DNA reports, he again suspects him after all he himself brought the reports.

While Raghav has only 7 days to prove the truth, it will be highly intensified to watch how Raghav and Pallavi will expose this imposter Mandar.

Stay tuned to the entertainment news website Serialgossip.com for more updates and the latest news of top TV shows