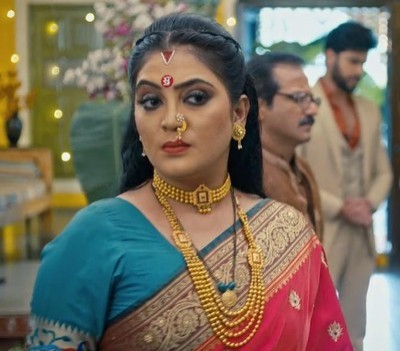 The upcoming episode of Star Plus popular show Mehndi Hai Rachne Wali is about to showcase some unexpected twist and turn.

Mandar’s DNA reports have come out and he challenges Raghav that he will get back Pallavi in his life within 7 days.

On the other hand, Sulochna has decided to get Pallavi back to Mandar and is making every attempt to bring them close.

Further, Sulochna calls Pallavi to attend the Satyanarayan pooja arranged for Mandar and asks her to make sheera for him.

Raghav also comes to attend the pooja with Pallavi and warns Sulochna to call him as well from the next time.

On the other hand, Raghav is worried that Pallavi might get separated from him because of her family.

Will Sulochna succeed in her plans? Stay tuned for more updates on SerialGossip.com