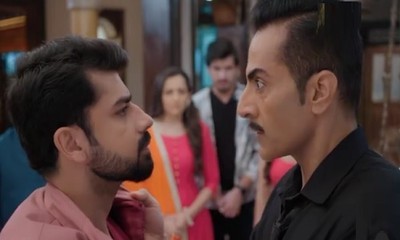 Hindi TV serial Anupama is about to witness the relationships in Shah Family falling shattered.

Paritosh disrespects Anupama and calls it ashamed to introduce her to his friends.

Vanraj loses his cool at Paritosh for stooping such low and thus before anyone could utter a word, he slaps Paritosh hard on his face.

Paritosh falls flat on his face when Vanraj grabs him from his collar and gives the reality check to him.

Vanraj could have spared Paritosh if he had raised finger on him, but this time he insulted Anupama which is unacceptable.

Vanraj reminds Paritosh of how he (Vanraj) did the mistake by not understanding Anupama and now he (Paritosh) is repeating the same mistake.

Where Vanraj asks Paritosh to have learned a lesson from his mistake,

What Vanraj does next is what shakes the depth of the Shah Family.

A big shock to Baa and Bapuji

Ultimately the argument worsens to such an extent that Vanraj ousts Paritosh from his property and asks him to earn himself if he is so proud of his income.

Vanraj is not ready to bear Paritosh insult the family anymore, so he ousts him from the family and house, but will his step bring any good?

Read the very first update at SerialGossip.com to know more.