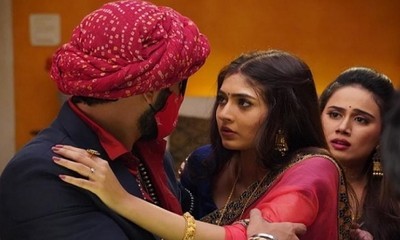 Star Plus top TV serial Mehndi Hai Rachne Wali is looking forward to some enthralling twists and turns in Raghav and Pallavi’s love story and this is what you shouldn’t miss next in the show.

Just when Raghav and Pallavi meet and plan their next move,

Here Mandar gets in action mode to catch them red-handed but he sadly fails.

Thus, the real game begins when Raghav takes a new disguise and reaches Deshmukh's house to execute his final plan against Mandar.

The romance gets on the peak when Pallavi slips and Raghav makes his dashing entry holding her in his arms.

Pallavi gets stunned as Raghav’s disguise is unrecognizable.

Now it would be interesting to watch how Pallavi recognizes her new lover in Raghav’s disguise.