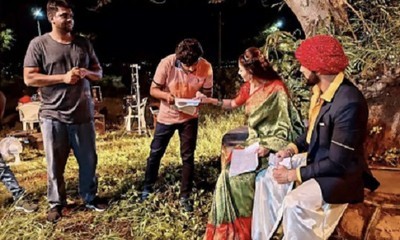 Star Plus TV serial Mehndi Hai Rachne Wali is gearing up for major twists and turns in the storyline on a very romantic note.

Raghav and Pallavi are fighting against evil Mandar.

Meanwhile, they meet outside at the midnight to discuss their next move against him.

Interestingly, this turns into their romantic date night and this is what you shouldn’t miss.

Here we have posted Sai Ketan Rao and Shivangi Khedkar's upcoming glimpse from their upcoming midnight scene in the show.

Mandar’s chapter is going to get over in the upcoming track because Raghav and Pallavi’s master plan is upgraded.

It would be interesting to watch what will happen next in the show and how soon Raghav and Pallavi will safeguard their relationship from evil Mandar.

So, make sure you read the new updates at SerialGossip.com to know more.