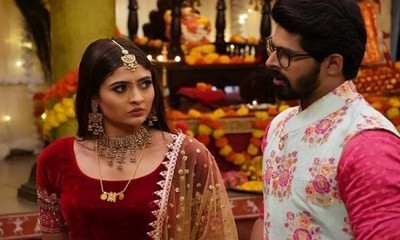 Raghav and Pallavi are ready to face huge truth in the upcoming episode story of Mehndi Hai Rachne Wali of Star Plus.

Mandar is planning and plotting in full swing to separate Raghav and Pallavi.

In between his conspiracies, the duos come across some suspicious clues and thus they begin to search for the truth.

Pallavi at the same time gets some bills hidden in Mandar’s room and this strengthens their doubt on him.

The story takes an intriguing u-turn when Raghav sees Mandar secretly meeting someone.

Raghav and Pallavi begin the investigation

While here Pallavi collects all the secret bills,

Herein Raghav tracks down the location of the man.

Let’s see how interesting they will expose Mandar because Mandar’s character is also coming to an end soon in the storyline.