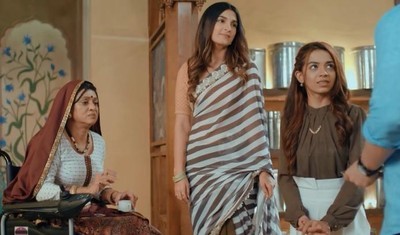 The upcoming episode of Star Plus popular serial Pandya Store will showcase an interesting twist where Rishita wants to turn a working woman.

Instead of sitting back at home and doing the household chores Rishita decides to work and turn independent.

Gautam Dev Dhara appreciates the idea of Rishita and aks her to go.

While Suman being the Mahasaas is not ready to let Rishita step out of the house to work.

Suman keeps Rishita occupied in kitchen work and gives her all the kitchen duties keeping Dev Krish away from work.

Suman asks Rishita to complete the kitchen work and then go to give her interview.

However Suman has planned to keep Rishita out of work.

Pandya Store: Major exit of Shiva from Pandya Family The up...

Pandya Store: Heartwrenching moment! Shiva in do or die situation

Pandya Store: Heartwrenching moment! Shiva in do or die situ...