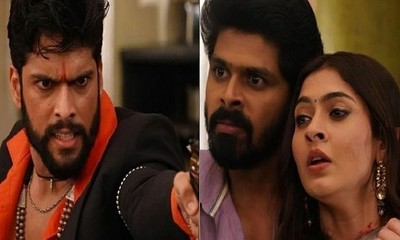 Star Plus Hindi serial Mehndi Hai Rachne Wali is gearing up for some high-intensity drama in the upcoming episode storyline.

The Deshmukhs celebrate grand pooja when Raghav determines to kill Mandar dead and close his chapter for once and all.

Things dramatically take troll as Aayi reveals the same to Pallavi and thus she rushes to stop Raghav.

However, the situation deteriorates as Mandar traps Pallavi and puts a knife on her neck to blackmail Raghav.

Now Raghav points a gun at Mandar but he can’t shoot him because Pallavi is in danger.

Will Raghav be able to save his Pallavi or Mandar will cross the line this time.

Check out the new latest posts and updates at serialgossip.com to know more.