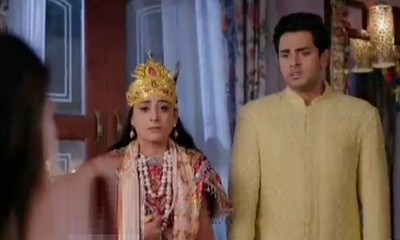 The upcoming story of Star Plus TV serial Saath Nibhana Saathiya 2 will see Gehna falling into a huge mess.

As per the ongoing storyline, Radhika replaces the fake sword with the real one.

Unfortunately, when during the act, Gehna as Krishna stabs Kanak aka Kans with the sword, the reel turns into reality.

Everyone stands shocked to the core the moment Kanak gets stabbed in real and starts bleeding.

Anant and the family rush to save Kanak while Gehna slips in trauma realizing the situation that she just stabbed Kanak in reality.

And this is where Gehna falls into a huge mess.

Anant and Desais to save Gehna

The Police interrogate Kanak about the person who stabbed her and shockingly she takes Gehna’s name.

Gehna gets arrested by the Police on the attempt to murder charges or not is the talk of the latter.

However, will the Desais and Anant be able to save Gehna is worth watching next in the show,

Don’t forget to check out the new posts and updates at serialgossip.com for more.

Saath Nibhana Saathiya 2: Gehna's hit Radhika to give up Anant

Kanak and Sagar join hands against Anant (Harsha Nagar) and ...