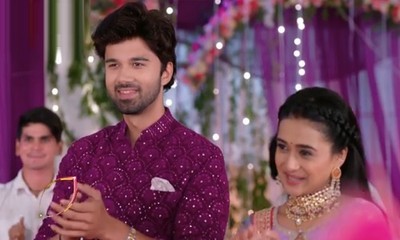 Aarav and Simar will face Geetanjali Devi’s wrath once again.

However, amid all this big fat drama, the person who triggered Geetanjali’s anger is none other than Reema.

Reema plays the loud sounds in the celebration and while Geetanjali hates music, this only infuriates her anger to the hell.

And thus she bursts out at Simar which literally slips the ground under Aarav’s feet.

Geetanjali Devi’s shocking burst out gets so intense that she doesn’t even think of Simar’s dignity.

Geetanjali publicly insults Simar and turns her dignity into dust when she compels her to get out of Oswals Ganpati Utsav.

Aarav is not ready to let Simar suffer so much when there is nothing so serious.

Let’s see how he will stand for Simar and how this will only worsen the situation.

Sasural Simar Ka 2: Aarav to accept Simar’s love for him

Geetanjali and Yamini past revelation in Sasural Simar Ka 2 ...