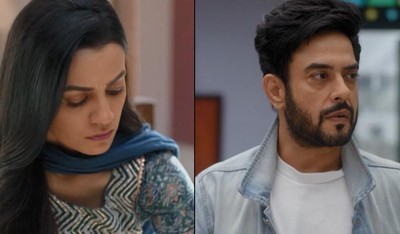 Zindagi Mere Ghar Aana new serial on Star Plus is showing Pritam who tries to take his place in Amrita's life replacing Karan.

As per the latest episode it is seen that Pritam hammers the door lock when on the other side the photo frame of Karan falls in Amrita's room and breaks.

Amrita loses her cool where she bursts out in anger on Pritam in front of the entire family.

Amrita never gets angry on anyone but this time it was about Karan.

Amrita gets happy with Pritam's gift

Pritam gets the photo frame and gifts Amrita the same making her happy.

Pritam replacing Karan in Amrita's life is seen when Pritam gives the frame to Amrita and she opens it up.

Will Marita accept Pritam in her life?