Anupama: Anuj Anupama to live together with GK? (Upcoming Twist) 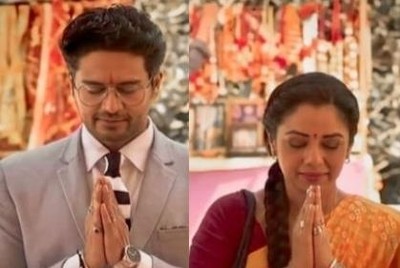 It was earlier seen that Anupama took a strong stand for Anuj which made Anuj and GK much happy.

Anuj danced in joy where he was seen over the moon and GK had tears in his eyes seeing happiness for Anuj at last.

Anuj is satisfied with this Anupama's support for them.

However Anupama faces more humiliation from Vanraj and Baa.

Where Anupama decides to pack her bags and leave the Shah House forever.

Anupama respects Bapuji Mamaji but henceforth she will not take Baa Vanraj Paritosh's torments and she walks out of the house to begin her new journey.

Whenever Anupama was in a problem Anuj Kapadia is the one who always stood by her side.

Will this time too Anuj asks Anupama to come along and stay with him and GK in their house until he makes arrangements for her in the new house?

Anupama: Pakhi to be a major roadblock in Anuj-Anupama's relationship

Anupama: Pakhi (Muskaan Bamne) to be a major roadblock ...

Anupama: Anupama opens up over Anuj's comeback in her life

Anupama: Anupama opens up over Anuj's comeback in her life ...

Anupama: Anuj all ready to unfold his past before Anupama

Anupama: Anuj all ready to unfold his past before Anupama T...

Anupama: Baa decides to separate from Anupama no stay under one roof

Anupama: Baa decides to separate from Anupama no stay under ...