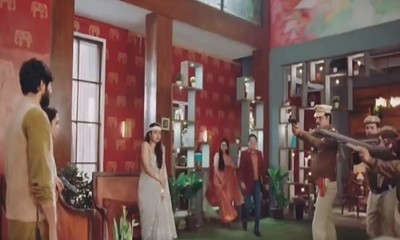 A shocking tragedy with Aditya, Imlie, Malini, and Sataykam in Imlie TV serial

A shocking storm is going to hit the Tripathi family next in the upcoming episode of Imlie TV serial.

As per the recent storyline, Satyakam returns to surrender but before he could do so the situation falls against him.

Malini traps him and when Imlie somehow finds them, the situation goes exactly against them as Malini plays her mind game with them.

Amid the deadly shootout in the closed room, Malini gets injured and while the gun is in Imlie’s hand, Satyakam quickly snatches it from her and takes all the blame on his head.

Imlie and Satyakam into a tight spot

Imlie and Satyakam both fall into a huge mess when the police point the gun at them.

While Malini is injured and she quickly points at them, Aditya’s trust in Imlie drastically breaks.

Will the truth come out or Malini will put Satykam behind bars and Imlie out from Aditya’s life?

Imlie (Sumbul Touqeer Khan) takes a dig at Anu and Malini in...