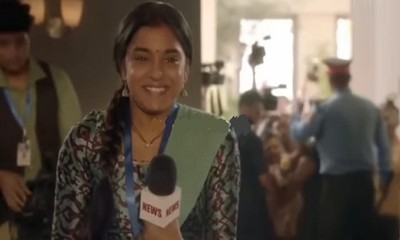 Star Plus TV serial Imlie has released the new promo and we are super excited to see Imlie in her new avatar of a news reporter.

The new promo witnesses Imlie and her assistant reporter marking their entry in the crowd of reporters where they have to interview a superstar actor.

Imlie is quite nervous thinking about how she will interview the actor in such a crowd and thus she gets an idea.

Imlie turns to guard and sneakily enters the lift in which the actor is.

Thus Imlie asks him a question when his secretary interrupts her calling her gawar.

Just then Imlie amazes the actor with her affluent English and this shocks the secretary too.

Imlie finally gets a chance to interview the actor while the other reporters keep standing outside.

Where this new journey of Imlie is quite exciting,

It would be interesting to watch how dramatic Imlie’s life will be in next story.