Bade Achhe Lagte Hai2: OMG! This is what Shubham did to Priya in a drunken state (Upcoming Episode) 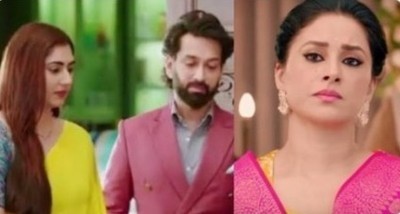 Sony TV's popular show Bade Achhe Lagte Hai2 is up with an interesting drama as Shubham bursts out at Priya.

It is seen that Priya attends the client as Shubham and Sid choose to party instead of work on the business.

However, this hurts Shubham's ego and he also gets scolded by Nandini for allowing Priya to take his place.

In a state of rage, Shubham gets drunk at the party and returns home late.

Further, he vents out his anger by accusing Priya of monitoring and controlling him.

Moreover, he also blames Ram that he does not trust him and hence he gave 5% partnership to Priya to keep an eye on him.

Hearing such words from Shubham leaves Priya shocked and hurt.

Shockingly it is later revealed that this was all a plan by Nandini to compel Priya to leave the business.

Now it will be interesting to see if Shubham and Nandini's this plan would succeed or not.