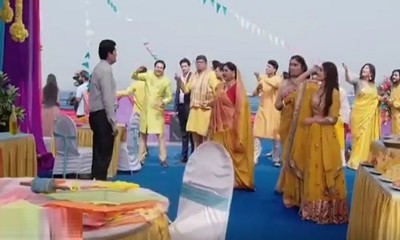 Saath Nibhana Saathiya 2: It's an end! Anant cuts off ties with Gehna

Star Plus daily soap opera Saath Nibhana Saathiya 2 is about to see huge drama in the upcoming Makar Sankranti festival.

As per the ongoing storyline, Anant and Gehna are currently at odds and now to make their fights worse, Kanak plays a dirty game.

After Gehna slaps her, Kanak plays her dirtiest game by bribing the doctor.

And this evil doctor exclaims in the celebration that Gehna bribed him to make her fake abortion report.

And that's just not the end.

Anant and the family gets shocked and poor Gehna has nothing to prove her innocence.

Unfortunately, Anant also refuses to trust Gehna and the situation deteriorates to such an extent that he cuts off his ties with her shocking everyone.

What will Gehna do now?

Let's see what will happen next in the show. Make sure to read all the latest updates and the latest news.

Abhay turns out new antagonist against Anant (Harsh Nagar) a...

A big bang in New Year in Anant (Harsh Nagar) and Gehna (Sne...

Major twists in between Anant (Harsh Nagar) and Gehna (Sneha...