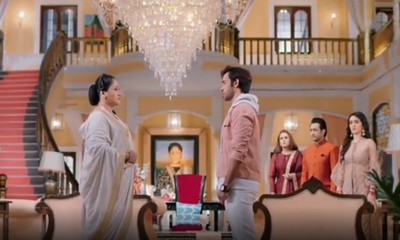 The popular TV serial Sasural Simar Ka 2 is about to see Vivaan’s masterstroke against Geetanjali Devi and the Oswals.

So, Geetanjali Devi offers Vivaan to accept the CEO post but he refuses.

Thereby, Reema, Chitra, and Giriraj manipulate Vivaan into accepting the position because then he will have power and everything.

Though they are thinking villainously with a motive to get everything in their hand, Vivaan has something else going on in his mind.

And that’s when he agrees and thus signs the papers becoming the next CEO of the company.

Interestingly, this is just not the end.

Vivaan takes promise from Geetanjali Devi that from now onwards he will take his personal decisions himself and he will have full right to do anything with his room.

Where Geetanjali happily gives the promise to Vivaan, now the twist in the tale is that he has a big motive in his mind.

Now, when Vivaan has full right to do anything with his room, he thus decides to bring Aarav and Simar to the Oswal House.

As the CEO, Vivaan not only takes this big decision but also, brings Aarav and Simar to his room because Geetanjali Devi herself has given him the right.

Let’s see how this will come as a huge shocker to everyone.