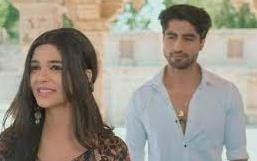 It was earlier seen that Abhimanyu operates Akshara and prays for her wellness.

When Akshara gains her conscious Abhimanyu quickly runaway and brings Dr Rohan in front of Akshara.

Dr Rohan sits in front of Akshara where she thanks Rohan for saving her life once again.

Akshara is much kind towards Rohan as he wants to be friends with Akshara.

However Dr Rohan excuses himself when the senior nurse comes in and reveals the entire truth of Abhimanyu to Akshara.

Hearing Nurse's story Akshara learns how much Abhimanyu is in love with her.

Abhimanyu tries to manipulate the facts and wanted to show that he does not love her but he failed and his love comes forth Akshara.