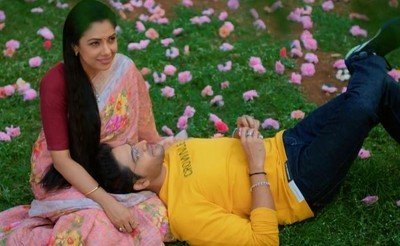 The upcoming track of Star Plus popular serial Anupama will showcase romantic drama.

It was earlier seen that Anuj was much disappointed with Vanraj Mukku's closeness and hence she clarifies the same with Vanraj and comes back to Anuj to see him in anger.

Anupama explains Anuj in her style where he understands the fact.

Later Anupama feeds Rasgulla to Anuj and slips into a dream sequence with him.

Anupama leaves her hair open and also her saree pallu.

She dances with Anuj and gets much close to him.

Anupama likes to spend time with Anuj where he sleeps on her lap in the garden.

Anuj wonders where Anupama is and breaks her dream leaving her scared.