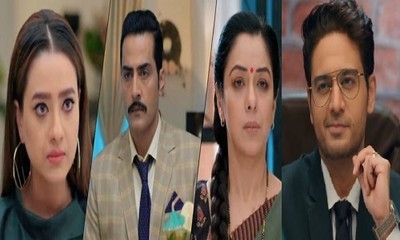 It’s a big bang war beginning between Vanraj and Anupama in the Anupama TV serial and we can’t wait to share the upcoming big twist with you.

Vanraj is planning his love game to make Malvika fall for him.

At the same time, Kavya who rushed to Mumbai in search for a job is actually playing a mind game along with Vanraj.

And that’s when Anupama has learned their ugly evil game against Anuj and Malvika.

Thus, next in the storyline, the mind game between Vanraj-Kavya and Anuj-Anupama begins in full action mode.

Anuj has sensed Vanraj’s intentions meanwhile Anupama has clearly learned about the truth.

So, now when Anupama has challenged to not let Vanraj succeed in his evil plans, she thus joins hand with Anuj to protect Malvika.

However, will Anuj and Anupama’s fight against Vanraj and Kavya will bring any new drastic storm?

Let's see how interestingly and intriguingly the upcoming story will unfold next in the show.