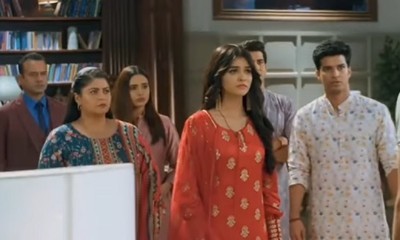 The popular Birla Family drama in the TV serial Yeh Rishta Kya Kehlata Hai (YRKKH) is once again going to spice up with Neil’s identity truth and Harshvardhan’s past love affair.

So, Abhimanyu can’t take enough of Harshvardhan’s dominance on Manjari when it was always, he who was wrong and ditched his mother.

Thus, Abhimanyu swears and determines to get Harshvardhan and Manjari divorced.

However, Akshara is not ready to let this huge storm hit the Birla Family.

Therefore, she stands in front of Abhimanyu when he announces the divorce.

Abhimanyu to bend down before Akshara

There will be a big drama happening in the Birla Mansion wherein Akshara is sure to not let Harshvardhan and Manjari get separated.

Now, let’s see how Akshara eventually manages to convince Abhimanyu to stop thinking about the divorce because it was a past and he has no right to decide for Harshvardhan and Manjari’s personal relationship.

Will Abhimanyu even forgive Harshvardhan?

YRKKH: Harsh thankful to Akshara for supporting him against Abhimanyu

YRKKH: A Big ThankYou From Harshvardhan to Akshara for supporting him

YRKKH: Not Abhimanyu but Neil to takeover Birla Hospital

YRKKH: Birla Hospital to Collapse Harshvardhan kicked out as CEO