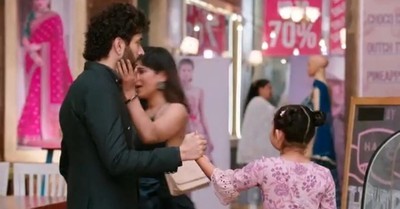 As Ram and Priya come face to face, Ram ends up hurting her with his words.

However, as he is trying ways to get rid of his girlfriend, he finds Pihu who turns his savior.

Pihu offers to solve Ram's problem but in return demands the last cupcake.

Pihu calls him Papa in front of his girlfriend who feels disgusted and breaks up with him.

Thus, they both laugh their heart out as the girl runs away from there.

As Pihu completes her promise, she demands remind Ram about the deal.

Furthermore, Pihu demands the cupcake but Ram breaks the promise and walks away with the cake.

However, Pihu plays a smart trick on Ram and finally, Ram's heart also melts for her.

Thus, Ram gives her the cupcake and fulfills his promise.

Stay tuned to serialgossip.com for more updates on the show.