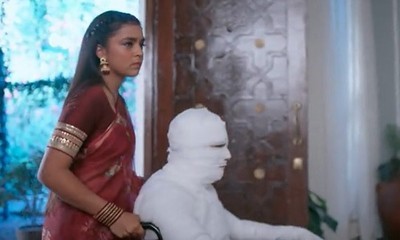 Finally, it's the real beginning of the cold war between Imlie and Jyoti next in the upcoming episode story of Star Plus serial Imlie.

The story is now going to get quite exciting and we don't want you to miss Imlie's next counterattack on Jyoti's conspiracy.

Jyoti makes sure that Madhav dies and the misunderstanding between Aryan and Imlie gets proved.

However, Imlie flops all her planning and plotting by bringing Madhav to the Rathore mansion after he gains his consciousness.

Interestingly, the reality is in fact not this.

So, Madhav in bandages like Mummy is not Madhav but is actually Sundar.

Madhav hasn't yet gained consciousness and here Imlie did all this drama only to mislead Jyoti and collect evidence against her.

What do you think, will Imlie and Sundar be able to expose Jyoti?