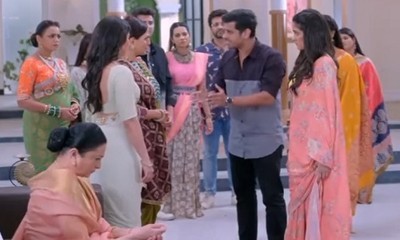 The upcoming drama in the popular TV serial Ghum Hai Kisi Ke Pyaar Mein is going to get more intense because of Pakhi's new conspiracy.

So, Pakhi confidently gives herself in to become the surrogate mother for Virat and Sayi.

However, Sayi refuses to accept her while Virat also stands by her decision.

Therefore, the story from on takes an intriguing U-turn as now when Sayi stays adamant on her NO, Pakhi thus decides to use another way.

So, further in the storyline, you will see Pakhi manipulating the situation into her favor in such way that Sayi will misunderstand her intimacy with Virat.

Pakhi is determined to get Virat at any cost and so she started this new pregnancy drama to separate Virat and Sayi.

What do you think will Sayi be able to fetch the truth?

Stay up to date with us to know about the next big drama.

GHKKPM: Sayi asks Virat to consummate with her and try their luck again

GHKKPM: Sayi refuses Pakhi to be their surrogate

GHKKPM: Sayi refuses Pakhi to be their surrogate Star Plus'...

GHKKPM: No Surrogacy but Remarriage for Pakhi next twist