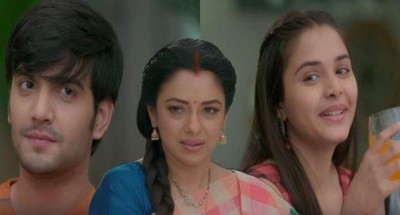 As seen so far, Anupama will notice Pakhi and Adhik checking out each other while they all meet out at Anupama's house for a small party.

Adhik seems to lure Pakhi with his good looks and tries to flirt with her eye to eye.

Meanwhile, Anupama notices Adhik and Pakhi locked eyes with each other and is left shocked.

Adhik wants to take over the Kapadia empire but Pakhi is unaware of the true intentions.

Adhik seems to be the guy who wants to grow in his life and be successful like Anuj and he will try to get closer to Anuj and defame Anupama's kids to make himself look better.

Anupama will notice Adhik staring and will also notice Pakhi's changed behavior toward her which will leave her worried.

Will Anupama take a step before it's too late? Will Pakhi understand Adhik's true intentions?

Anupama: Kinjal's baby dies on the spot she is very critical

Anupama: Kinjal's baby dies on the spot she is very critical...

Anupama: Nidhi Shah opens up about quitting Anupama and upco...

Anupama: Not Anuj but Barkha uses Vanraj to break Anupama