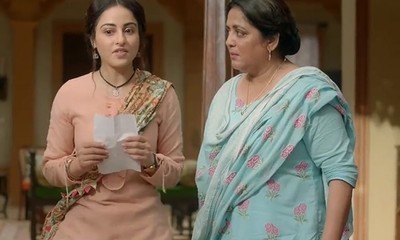 Star Bharat new TV serial Channa Mereya is soon going to see a face-off meeting between Adi and Ginni and this meeting is going to be amazing.

It is seen how Adi returns to India from Canada and badly misses his late-mother.

While his father married another woman Supreet, now Adi is triggered to take revenge of his mother on his father Amber.

And here he wants to first buy the most-famous dhaba that is Ginni's dhaba.

The first meeting between Adi and Ginni comes out quite intriguing.

When Adi gives the cheque of 10 lac to buy the dhaba, Ginni chooses her pride and her father's love over money because this dhaba was her father's only big dream.

And so, when Ginni refuses to sell it off but Adi badmouths her, the furious girl Ginni takes up the cheque and slaps it harder on the latter's face.

Let's see how this tashan wali first meeting will spice up some love between Adi and Ginni.

Keep up with us at serialgossip.com for more updates.