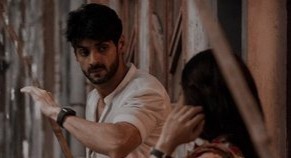 Amber tells Aditya that he wants to learn nothing from him. Aditya tells him that he is trying to forget his Mother's Memories which he won't let happen.

Amber is about to leave from the table but Dadaji stops him and asks him not to do so as it is like insulting the Food which they never do.

Surpreet's Son asks whether Amber won the competition after Dadaji tells them about the Party to which Amber tells him that the Party is for Aditya.

Amber then spits the Food and says that he has no mood to Eat anymore and leaves. Aditya hurts himself.

Aditya meets Ginni whose bike is struck and the Rain starts pouring because of which they both take shelter.

Ginni applies the Medicine to Aditya

They have Tea and the Tea Staller recognises him which Ginni shows her disappointment for him leaving the Competition. Aditya removed her struck Bike and leaves.

During the Party, Amber tries to make Aditya feel low and also humiliates him asking him to join as the intern.

Dadaji announces that soon Aditya will be taking over the Business and responsibilities of Amber so Amber has to retire which makes Aditya smirk while Surpreet and Amber are shocked.

Aditya asks Ginni for the Dabaa which makes her shocked. Aditya fights with the Wrestler who beats him up. Ginni applies Medicine to his wounds.

Stay Tuned to Latestgossipwu.com for the Latest and Exciting Updates of Your Favourite Shows.