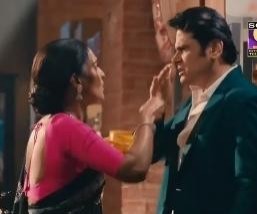 It seems Nikhil comes to the kitchen where Pallavi too comes there and the glass jar falls on his head and nose by Pallavi.

Nikhil starts bleeding in pain when Pallavi asks him to stop his drama.

Nikhil asks Pallavi to witness the blood and not the drama when Pallavi begins her Desi Nuske and cures Nikhil's wound.

Nikhil and Nandita plans to get Harsh Manna back

Ajeeb Dastan Yeh!!! Nikhil and Pallavi loves each other a lot but due to past misunderstandings, they are unable to reunite in love.

On the other side Manna and Harsh are residing with Pallavi and Nikhil cannot take this more.

Nikhil wants his kids back with him where Nandita too wants the same.

Manna is living with Pallavi for motherly love but looks like Harsh has some other plans.

Apnapan: No Escapism! Barkha finally realise mistake thanks to Manna

Apnapan: Pallavi feels Nikhil has returned with baggage of troubles for her

Apnapan: Pallavi feels Nikhil has returned with the baggage ...