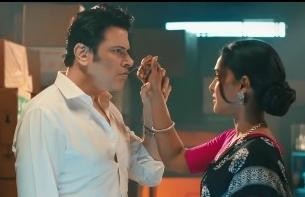 The upcoming episode of Sony TV popular new serial Apnapan is showcasing interesting twist and turn where Nikhil and Pallavi are locked.

Nikhil gets mich frustrated where his Blood pressure level shoots up.

Nikhil has not carried his medicines when he decides to take the ice steam to cool down his body temperature.

On the other side Pallavi understands that Nikhil is going through much pain and does not have medicine.

Nikhil thus asks Pallavi to shut up as he was not aware of the upcoming storm in his life that he will get locked up with Pallavi.

Pallavi thus gets the cure where she is an expert in her Desi Nuska where she immediately mixed honey ginger powder along with zeera powder and gets the same for Nihil.

But Nikhil throws tantrums and he is unable to take the medicine but Palalvi stamps on his feet and makes him drink the same.

Nikhil and Pallavi have a heart fuse at the moment.

Let's see what twist is waiting ahead for Nikhil and Pallavi in their life.

Apnapan: No Escapism! Barkha finally realise mistake thanks to Manna