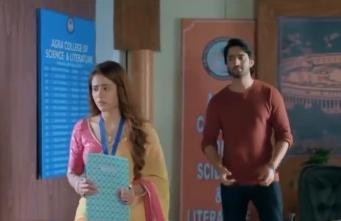 It was earlier seen that Krishna loves Sayuri a lot where he wants to love her and just her.

On the other side Anjali is hatching plans to win Kanha's heart and get close to him.

At the same time Anjali also manipulates Saroj that Kanha might get arrested if her father comes to know that she committed suicide due to Kanha being the prime reason.

In the interim Kanha goes to drop Sayuri to college where he asks her to hold him tight and after she goes he wants to turn back and see him so that he gets confirmed that Sayuri too loves him.

Sayuri does not say anything where she too loves him deeply where she is tight-liped just for the sake of Anjali and Saroj's happiness.

Woh To Hai Albela: Kanha go down on knees for Sayuri unaware of big storm

Woh To Hai Albela: Kanha go down on knees for Sayuri unaware...