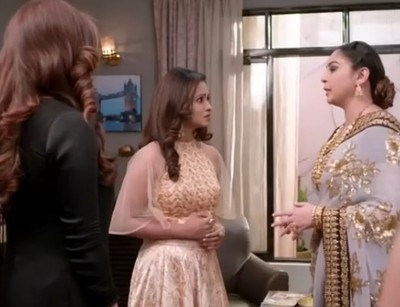 Zee TV's dramatic show Kumkum Bhagya is up with some shocking twists and turns.

It is seen that Pallavi has overheard Daai Maa saying that Prachi's child is a good omen for the family.

Hence, Pallavi is after Prachi's child and is going against Rhea for safeguarding Prachi.

As revealed, Prachi is feeling guilty for being the reason for Rhea's pain and decides to leave the house.

Rhea bursrs out at Pallavi

However, once again Pallavi takes Dida's help to stop Prachi from leaving.

Further ahead, Pallavi also plans to remove Rhea out of the house so Prachi does not attempt to leave again.

But this is not going to go well with Rhea and she questions Pallavi about her intention.

As Pallavi shields Prachi, Rhea burns in anger and bursts out at Pallavi.

Let us wait and watch how Pallavi realizes Rhea's true face seeing her behavior towards her.

Kumkum Bhagya: Rhea in trouble as Pallavi turn against her ...