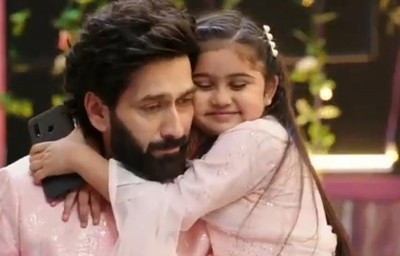 As seen, Nandini creates a drama of panic attack to stop Ram from celebrating Priya's birthday.

Further, she succeeds as well as the party is called off and the guests and Minister leave.

Seeing Nandini in bad condition, Ram panic and gets worried for her health.

Nandini smirks that her plan is working well and as planned.

Meanwhile, Pihu comforts Ram with positive words and helps him to stay strong.

Further ahead, she suggests Ram not panic and assures him that his mother will be fine soon.

Furthermore, she hugs Ram with all her love and care bringing hope to him and pacifying him.

Ram feels amazed by Priya's upbringing that such a small child is so brave just like her mother.

However, seeing this Nandini gets wild and jealous that Ram is ignoring her for Pihu.

Stay tuned to serialgossip.com for upcoming twists and turns.