GHKKPM: Pakhi in Jail to use big trump card against Virat-Sayi (Upcoming Twist) 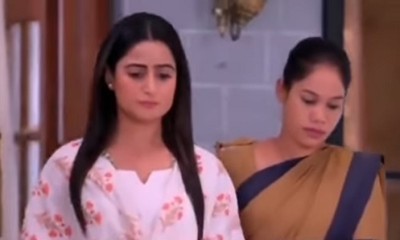 Star Plus top TV serial Ghum Hai Kisi Ke Pyaar Mein (GHKKPM) is gearing up for a new struggle for Sayi after Pakhi gives birth to her child.

Pakhi almost succeeds in snatching the child from Sayi but at the last moment, the latter turns the table.

Therefore, after the delivery, Sayi exposes Pakhi’s conspiracy and thus gets her arrested for illegally getting the surrogacy procedure done.

The Chavans are disappointed with Pakhi’s betrayal but at the same time, they have mixed feelings for her.

Thus, now Pakhi in jail takes the advantage of this situation.

Sayi to fight back Pakhi

Pakhi is now ready to use a big trump card against Sayi and that is the child.

Wherein Pakhi is going to claim her right on the child as the little child needs his birth mother more than anyone,

Will Sayi be able to flop Pakhi’s new conspiracy?

GHKKPM: Pakhi over the moon Virat to finally touch her for delivery