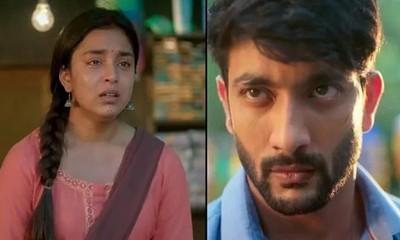 Star Plus Hindi TV serial Imlie is all set to see further Malini entering Pagdandiya to keep Aryan away from Imlie.

The latter is taken aback to see Malini because the past is now closer to get exposed.

Imlie brought up Cheeni as her own daughter when Malini left the latter alone in the temple.

Therefore, now that Malini has already met Cheeni, Imlie is now getting scared of if the truth will come out and Malini will snatch Cheeni.

Thus, the story takes a big U-turn and hereon, Imlie decides to make a big move to keep the past secret.

Imlie and Aryan major face off

In the upcoming track, you will see Cheeni getting closer to Aryan which will piss off Malini.

It would be highly intensified to watch how intriguing the next story track will be and how Imlie will keep Cheeni away from Malini.

Make sure to read the new updates at serialgossip.com

Imlie: Aryan gets Imlie arrested, Cheeni wants to know Who is her Father

Imlie: Aryan gets Imlie arrested, Cheeni wants to know Who i...

Imlie: Cheeni Ki Supari given, MAAlini turns ruthless for re...