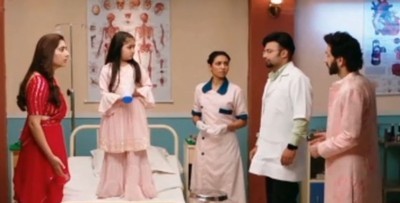 Sony TV's most interesting show Bade Achhe Lagte Hai2 is up with exciting twists and turns.

As seen, Pihu is hospitalized while Ram and Priya worry for her wellbeing.

However, it is not easy to treat Pihu as she is very smart and does not allow the doctor to take her blood sample.

Here, Ram teams up with Priya, and they both fight to distract Pihu.

Further ahead, Priya calls Ram khadus and selfish person and refuses to help him.

Pihu stands up for Ram

Hearing this, Pihu intervenes and defends Ram that he is not as khadus or bad.

Furthermore, she tries to convince Priya to help Ram as he is very nice and helpful.

Also, he cares for them and makes attempts to make them happy.

BALH2: Family Love! Ram and Priya turn guardians for Pihu at the hospital