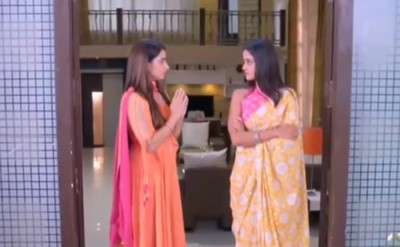 In Ghum Hai Kisike Pyaar Mein Pakhi and Sayi will be seen in a major confrontation in the upcoming episode.

Pakhi will be seen keeping her all dreams to become Virat's wife and Vinayak's mother aisde in front of Sayi.

On the contrary Pakhi will be all ready to make a drastic step to ask Sayi to come along with Virat and Pakhi to Chavhan house.

This major step taken by Pakhi will be proven as the turning point in Virat and Sayi's life, but it will seem that Sayi will not be interested.

Sayi's hatred for Virat will be so great that Sayi will not be ready to even Virat as a friend so leave alone being husband and wife.

Pakhi granted hatred instead of forgiveness by Sayi

Pakhi will be seen repenting in the fire of bad dreams with all the problems that Pakhi have created in Virat and Sayi's life.

In the upcoming episode of Ghum Hai Kisike Pyaar Mein Pakhi will be seen seeking forgiveness from Sayi but all of Pakhi's beggings will fall on Sayi's deaf ears.

The question will be that will Sayi never even try to forgive Pakhi inspite of Pakhi even ready to go down on her knees before Sayi?

Stay tuned with me to get some more rock solid updates on Sayi and Pakhi's true face off.