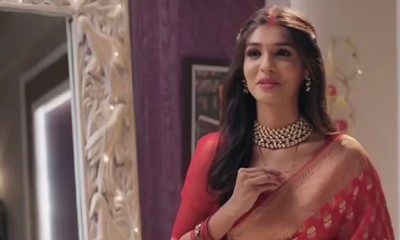 Star Plus Hindi TV serial Yeh Rishta Kya Kehlata Hai (YRKKH) is gearing up for a huge tamasha in the Goenka Mansion.

Abhimanyu surely gives a chance to Akshara to prove herself and Kairav’s innocence and she even succeeds but, in the end, Kunal changes everything.

Kunal’s manipulative conspiracy now instigates Abhimanyu to the core that now he swears revenge on Akshara and Kairav.

Thus, he calls the media to the Goenka mansion just when Akshara gets ready as his bride hoping he has finally forgiven her.

The situation now deteriorates and Akshara gets so furious that she grabs Abhimanyu’s collar and wrecks her anger on him.

So, let’s see how dramatic the next track will be.

Will Akshara be able to save Kairav?

YRKKH: Akshara's solah singaar for Abhimanyu get ruined with bang

YRKKH: Akshara turns BRIDE for Abhimanyu but latter pushes her off

YRKKH: Akshara smirks at Kunal to now get DEFEATED

YRKKH: Akshara to sing for self exposing Maya-Kunal's duo amidst Abhimanyu