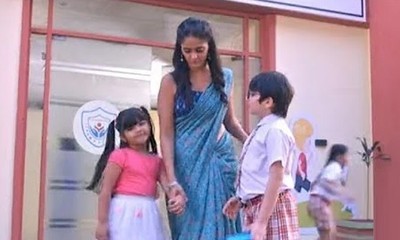 In the upcoming episode of the Star Plus serial Ghum Hai Kisi Ke Pyaar Mein (GHKKPM), now you will see a lot of new changes in the storyline.

With Virat getting Savi’s admission to Vinayak’s school, the situation is unfortunately deteriorating.

Therefore, now when Sayi refuses to get Savi’s admission to Vinayak’s school,

Here Virat eventually decides to shift Vinayak from his school to Savi’s school.

However, this doesn’t become acceptable to Vinayak.

Thus, further in the story, Vinayak refuses to go to Savi’s simple school with no high-class facilities to which he is now addicted.

Moving on, Virat is going to find himself stuck between Vinayak and Savi.

Wherein suddenly Vinayak will act all negative just like his Pakhi Mumma,

Let’s see how Sayi will change Vinayak’s mindset even after he dares to disrespect her and Virat.