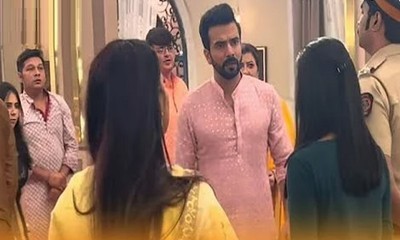 Earlier it was seen how Rishabh and Anjali spend some personal time together on the stormy night.

Anjali tries her best to seduce Rishabh but the latter doesn't give in.

And now when he hides all about this night from Preeta,

Unfortunately, this becomes a big trouble when next day, Anjali reaches Luthra House with Police.

Therefore, everyone gets shocked when the Police arrests on the charges of molesting Anjali.

The situation deteriorates and now everyone is taken aback at Anjali's disgusting blame on Rishabh.

So, let's see how Preeta will protect Rishabh and if Anjali's dirty conspiracy will cost Rishabh.

Make sure to read serialgossip.com for new updates to know what happens next.