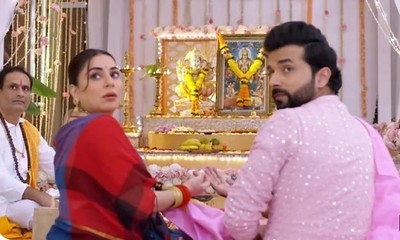 In the upcoming episode of Zee TV serial Kundali Bhagya, now you will see the situation worsening for the Luthras especially Rishabh.

Poor Rishabh falls into a drastic trap of Anjali when she shockingly frames him in molestation case.

The Luthras announce a grand pooja for Rishabh and Preeta wherein the shocking storm comes up when Anjali brings the Police to the Luthra Mansion.

And now what shakes the depth of the family when Anjali accuses Rishabh of molesting her.

Therefore, everything messes up because the police have strong evidence against Rishabh and now the latter also has no clue of how to prove his innocence.

Thus, Rishabh is thrown into jail and this makes Preeta upset.

And that’s when Anjali’s real face comes forth.

Moving on, Anjali is not going to stop here but will now manipulate Arjun against Preeta and Rishabh.

Wherein Karan aka Arjun started to feel back for Preeta, herein Anjali is determined to not let him do so.

So, let’s see what happens next in the show and how Preeta will save Rishabh.

Or this will ruin her marriage life?