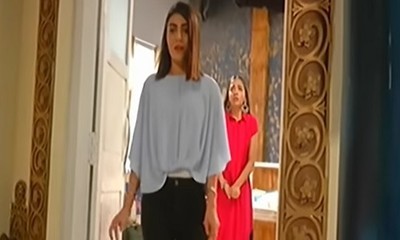 In the next episode of Star Plus serial Pandya Store, now you will see the Pandyas master plan against Shweta.

So, Dhara, Rishita, Dev and Gautam fail to catch Nitin.

Therefore, the big twist in the tale comes up when Rishita makes fake blood in her room and Dev gets scared of it.

Thus, when Dev shouts in fear, here Shweta gets suspicious and quickly rushes.

And that’s when Shweta almost sees the blood and even Dhara’s effigy.

However, Dev and Rishita smartly backfire.

Dev and Rishita’s next big move

Moving on, you will see Dev quickly hugging the effigy and sleeping inside the blanket with it meanwhile Rishita who spills the fake blood on the floor intentionally falls on it to hide it.

So, Rishita surely misleads Shweta but will this murder plan succeed?

Pandya Store: OMG! Pandyas to murder Dhara over a plan

Pandya Store: Plan Flop! Dhara gangs up with Pandyas next in

Pandya Store: Plan Flop! Dhara gangs up with Pandyas next in...

Pandya Store: Nitin tries to escape from the hospital Star ...

Pandya Store: Dhara-Rishita to chase down Nitin with master plan

Pandya Store: Dhara-Rishita to chase down Nitin with master ...

Pandya Store: Shweta uses Shiva and Krish to safeguard herself