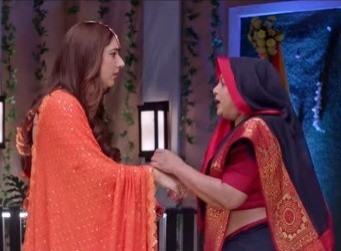 As per the ongoing track, Swati has broken Ram's heart by leaving him and walkin gaway with Lakhan.

Ahead, Ram is highly disturbed by this as he feels both his mothers cheated him.

He feels miserable as none of his mothers love him but his money.

Priya is also hurt seeing Ram and now she is going to come across the devastating truth.

As Priya walks in the kitchen to bring she sees Nandini threatening Swati.

She follows Nandini and overhears all her conversation with Swati.

Nandini threatens Swati to leave the city and break all contacts with Ram.

Priya feels relieved that Swati is not a cheat but Nandini had blackmailed her to act so.

Will Priya be able to give Ram the happiness of mother's love?

Keep tuned to serialgossip.com for further news and updates on the show.

BALH2: Ram misunderstand Priya for her secret meeting with Lakhan

BALH2: Who will do Ram and Priya's gatbandhan Swati or Nandini?

BALH2: Oh No! Lakhan disrupts Ram and Priya's marriage with his bombing entry