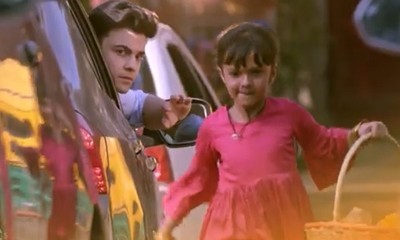 The most awaited twist is finally going to happen next in the upcoming story of Zee TV serial Kumkum Bhagya.

The current story witnesses how Ranbir and Prachi miss their daughter even after 6 years.

Prachi still has Panchi’s belongings and thus she misses her badly recalling the past.

So, Ranbir and Prachi are surely separated from each other but destiny is going to bring them together for their daughter Panchi.

And here Khushi aka real Panchi finally comes across Ranbir on the signal.

Poor Khushi is living a miserable life wherein her fake mother is making him work and beg on the streets.

Thus, when Khushi sells flowers and sneakily drops one rose in Ranbir’s lap, the latter gets surprised and feels some connection with her when she runs away.

So, let’s see how Ranbir and Prachi will finally find out about Khushi only being their Panchi.