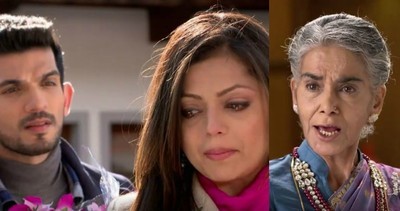 Naina was still under impression that Raghav is Veer's brother and is the leagal heir of the Mehra family.

Now, Naina gets to know the truth of Raghav from Pam that Raghav is no one else than an adopted son to the family.

Naina gets very much depressed watching that Raghav is no one else but just a mere servant to Mehra house.

Raghav and Naina are just having a lot many misunderstandings amid the couple at this point of time.

It would be very interesting to watch as to how would Naina and Ragha get out of these misunderstandings?

PMHMD: Naina's touch me not attitude towards Raghav astonish dadi

Naina's (Drashti Dhami) touch me not attitude towards Raghav...