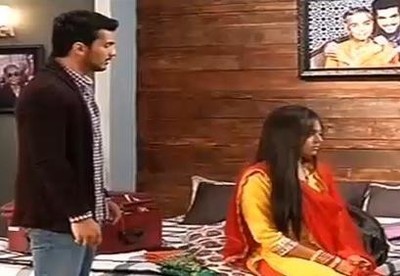 It so happened that Raghav had earlier got the ring that Naina had sold out for some monetary issues.

Now, that Sudha took all the jewelery from Naina and Raghav witness that Naina absolutely does not have anything to wear.

Raghav removes the ring from his cupboard and gifts it to Naina to wear out of love.

Naina's feelings for Raghav risen up

Naina gets very emotional about eyeing that Raghav gifted Naina's ring which was attached with all the emotional values of Naina's mother.

It would be very interesting to watch as to how would Naina react with Raghav for this abundant love gift from Raghav?

PMHMD: Naina's jewelry snatched back by Sudha as Raghav helpless

Naina's (Drashti Dhami) jewelry snatched back by Sudha as Ra...

Lots of emotinal drama between Raghav (Arjun Bijlani) and Na...

PMHMD: Naina's touch me not attitude towards Raghav astonish dadi

Naina's (Drashti Dhami) touch me not attitude towards Raghav...