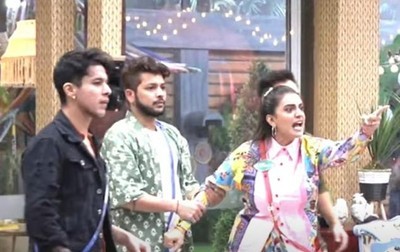 Bigg Boss New captain Zeeshan and Divya start cleaning the house while Zeeshan gets into a fight with Akshara for not doing her work.

Akshara tells Zeeshan that she is feeling low and will keep her things away later.

Later, Zeeshan gets angry and he takes Akshara's things near the washroom area and informs her about it.

Zeeshan and Akshara get into a big argument and yells at Zeeshan for giving her orders.

On the other hand, Zeeshan tells her that he is the boss man of the house and she will have to obey the orders.

Later, Akshara goes to the washroom area and starts throwing things in the house, and warns others to touch them.

Akshara gets hurt during the fight

Zeeshan gets angry and he says that now Akshara will not cook food and also no one will give her food.

At the same time, Akshara asks Zeeshan to show some respect and they get into a big fight.

Akshara gets hurt when she accidentally pushes him while Zeeshan says that she is doing it to gain sympathy.

Akshara asks Bigg Boss to call her to the confession room.