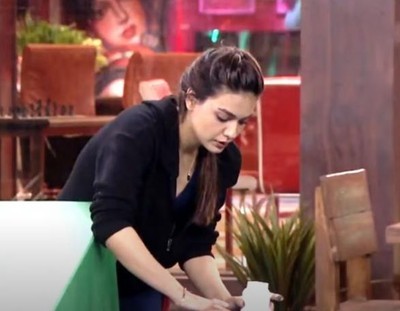 The previous Boss Man and Boss Lady of the house, Shamita and Raqesh were with mutual consent of contestants were out of the captaincy task.

Hence, Bigg Boss makes Shamita and Raqesh the Sanchalak of the task.

All the five Jodi's are given a workstation for their task and as soon as the buzzer is on the contestants have to pick the Dominoes blocks and paintbrushes.

The contestants had to write the names of that Jodi whom they would like to eliminate from the captaincy task.

Meanwhile, Pratik and Akshara get out of the task with the most votes.

Later, Karan and Riddhima get out of the captaincy task with the most votes.

Competition amid two Jodi's to win the captaincy

Pratik was seen supporting Nishant and Moose's Jodi and he throws Zeeshan's blocks in the pool.

However, Sanchalak disqualifies Nishant and Mosse from the task.

Sanchalak did not find Milind and Neha's blocks arranged properly while Zeeshan and Divya did their task well.