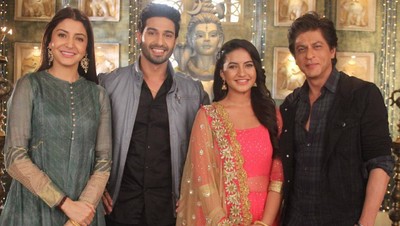 As per the track Suraj is heartbroken over Chakor’s rejection for marriage.

Moreover he confesses Chakor but she is not ready to accept him as she is trapped in Kamal Narayan’s evil trap.

In the coming up track, Harry (Shah Rukh Khan) confronts Chakor and makes her realize that nothing is ended till hope is alive and love is alive he asks Chakor to go and say ‘I LOVE YOU’ to Suraj.

On the other side Sejal (Anushka Sharma) asks Suraj not to make love a fight of ego where after she also confesses him to confront Chakor.

In the forward series to come, Harry and Sejal get Suraj and Chakor.

They confront Suraj and Chakor and ask them to unite with love confession.

Harry and Sejal give engagement ring to them and Sukor wears the ring.

It would be interesting to watch as to what havoc will come in Sukor’s life after they have engaged against Kamal Narayan.

Stay tuned with us for more interesting updates.

Udaan: Happy space amid Imli-Ajay-Chakor as Gun factory shut down