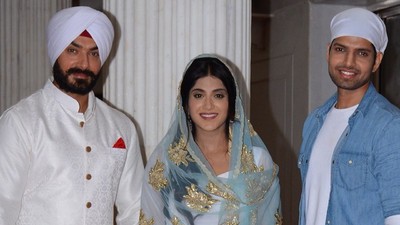 Choti Sardarni is one of the famous and most popular show of Colors Tv casting Mehar (Nimrat Kaur Ahluwalia) and Sarb (Avinesh Rekhi) in main lead.

As per latest resources Choti Sardarni will telecast its new episodes again on the television , where shootings have been resumed.

However where further before Manav’s entry, Sarb will confess love to Mehar and also Mehar will accept Sarb’s love, amid this Manav will enter in the show again.

What will be Mehar’s reaction seeing Manav back?

Excited to watch your favorite shows again on the tv, share your reviews in the comment box mentioned below.

Stay Tuned with us for more updates and exciting updates for your favorite shows.

Choti Sardarni: Sarb decided to confess his love for Mehar ...

Choti Sardarni came back with all new episodes, new twist in tale leaked

Choti Sardarni came back again with all new episodes Choti ...

Chotti Sardani fame Param & Yuvi will be missing from show after lockdown?

Which Hindi TV serial are you missing during lockdown?

Which Hindi TV serial are you missing during lockdown? Star...

Choti Sardarni: Meher Sarabjit get closer in love during lockdown